A new time-stopping adventure is coming to PC, Mac, Linux PS4 and PS Vita this month!

SURPRISE! We’ve teamed up with solo-developer Bodie Lee of Lunar Ray Games to bring you the beautiful story-driven action platformer, Timespinner. You won’t have to wait long to get your hands on it either – Timespinner will be available on September 25th! (Be sure to Steam wishlist it here for launch alerts!)

In Timespinner you follow Lunais, a head-strong young timekeeper, on her quest for revenge against the evil empire of Lachiem. With her family murdered in front of her and the ancient Timespinner device destroyed, Lunais is suddenly transported into an unknown world, stranded with seemingly no hope of return. Using her power to control time, she vows to take on the Emperor himself! But sometimes the course of history isn’t quite as black and white as it seems… 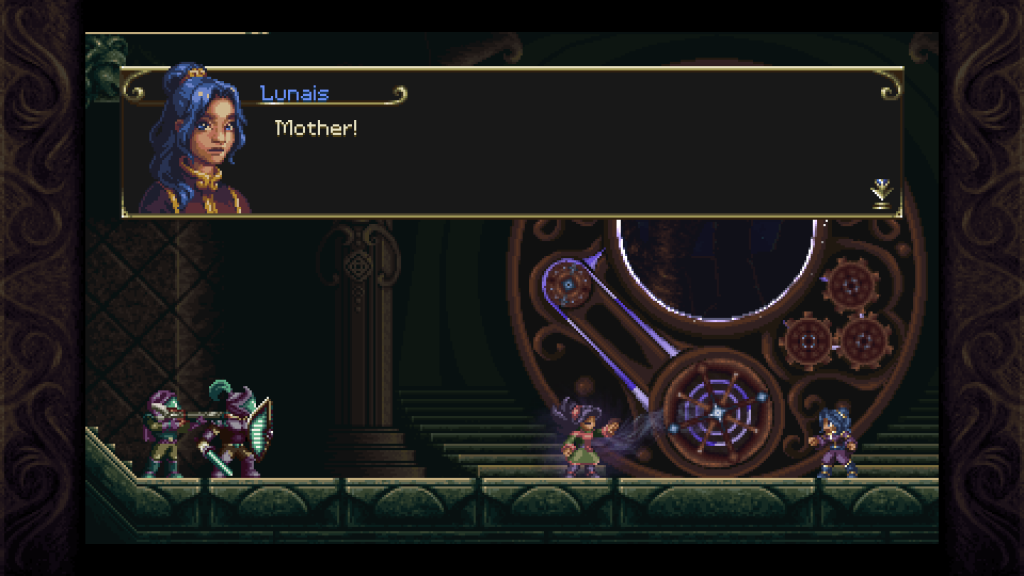 Timespinner is a lovingly-crafted ‘Metroidvania’ adventure, inspired by classic 90s action platformers like Castlevania: Symphony of the Night and Mega Man X. Timespinner refreshes the formula by adding several new gameplay mechanics to give a unique spin on the genre. Lunais’ ability to stop time is the game’s signature mechanic, freezing all enemies in the room for a limited amount of time. While time is frozen, she can use enemies as platforms to reach new areas and hidden treasures, or maybe get herself into a more advantageous angle in battle.

The orb system is another key feature which sets Timespinner’s combat apart. Lunais can equip crystal balls composed of condensed magic to perform a variety of attacks: melee, spells and an always-on passive (such as a shield or spinning blades). Throughout her adventure Lunais will find many different types of orbs to wield, and can even mix and match different melee orbs to form lethal combinations. As each orb gains experience it will unleash even more powerful attacks, so be sure to level them up!

Timespinner’s complex story and universe was actually a rather long time in the making. Pixel artist, programmer and designer Bodie Lee started crafted the game world while he was still in grade school, making fabric figures of each character and cataloguing their adventures in notebooks. It wasn’t until high school when Bodie could start turning this fantasy world into a reality, making several prototypes of the same game world using RPGMaker2000 and later turning it into a full game prototype for a programming class in college. After 4 years of working in AAA games, Bodie decided to leave to start work on Timepsinner full-time, determined to finish his dream project. Bodie set up a Kickstarter campaign for the project in June 2014, and in a month alone successfully raised $176,667 (over 300% of his goal!) to complete Timespinner, with the help of 5,751 backers.

We’re super excited to be working with Lunar Ray Games on Timespinner’s release, and hope you’ll pop by our booth at EGX (Birmingham, UK) this month, to get hands on with the game before it releases on September 25th! You can find out more about Timespinner by checking out the game’s swanky new website, saying hello to Bodie on twitter, or joining in the conversation over at Reddit!